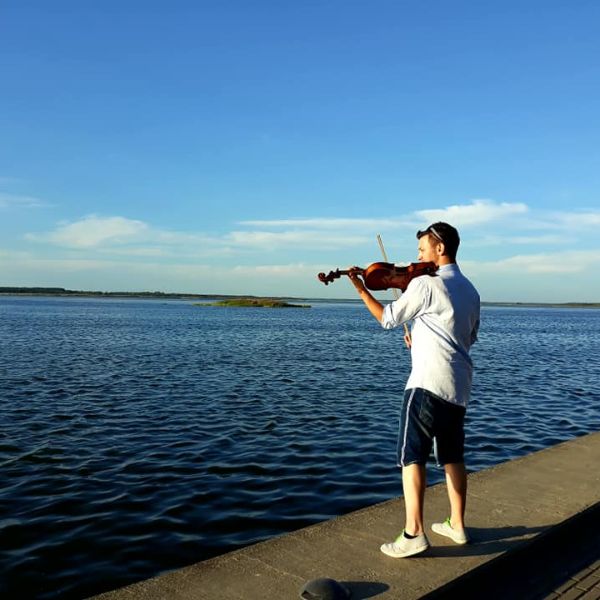 Ljupcho Trajanoski in 2011 started his college in Skopje and in 2015 he finished his Bachelor studies in 2015 in the Music Academy of performing in Bratislava-Slovakia he got a reward and was chosen for the best student by CEEPUS program to study abroad in Slovakia.

In addition to his studies Ljupcho participates in a many cultural events in several countries: Macedonia,Kosovo,Serbia,Romania,Slovakia,Austria,Czech-Republic,Denmark,Poland Itally,Finland,Sweden,Germany He was playing in Youth Orchestras in Macedonia,he was also chosen for reward from European Youth Organization MusXchange and was sent to Orchestra Giovanille Italliana where he was touring in Florence and Rome with that Orchestra,he played a many times with the professional Orchestra in Czech Republic -Moravsko Slezska Sinfonietta as a guest musician and was a principal Violist.he played in Autumn Music festivites in Skopje festival where he promote a Macedonian Composer-pieces for solo Viola and chamber Music.While he was studying in Slovakia he was attending a many events of performances as a soloist and as a chamber Musician he was saving solo records for Slovakian Movies in the Radio Orchestra and in the faculty collaborating with the actors of the

Academy.He played in Wiener Jeunesse Orchestra with a conductor Daniel Meyer from USA and had concerts in Salzburg,Vienna ,Graz he also played in Norden Orchestra in Denmark and touring through Scandinavia with the conductor from USA Lorrence Foster.In 2016 on the biggest festival in Macedonia for classical Music and Arts ??Оhrid Summer Festival?? he was chosen as a best student to join the International Menuhin Orchestra from Switzerland and to play with the famous soloist Maxim Vengerov.

Ljupcho is also in collaboration with a New Ensembles and Contemporary Composers from England and attend a projects to promote them Music.He is also a teacher in a Music School Violin/Viola.