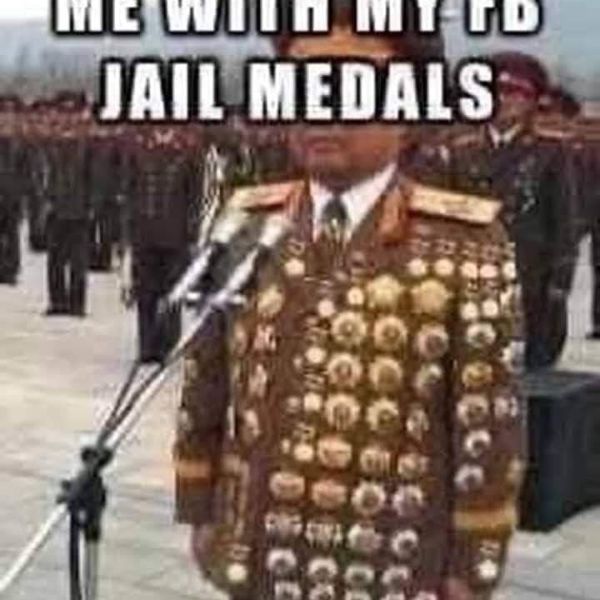 Started by sdaddyo, © All Rights Reserved 2020

Help me finish this collaboration. I am currently requesting uploads for the tracks listed below. Feel free to contribute.
- sdaddyo

This is a parody of Folsom Prison Blues.

FB Prison Blues
A parody written by Michael Penley & Don Stanton
I see those people postin', postin' every day. But, I can't do no
postin', they've taken that away. I'm stuck in Facebook prison &
time keeps draggin' on. When I see those people postin', I know
they done me wrong.
If they free me from this prison, if those Facebook rules were
mine. I bet I'd try to keep 'em a little more in line. Far from
Facebook Prison, that's where I want to stay. And I'd let those
music posts blow my blues away.
(MUSIC BREAK)
I see new members comin', comin' into groups. They won't even
let me say welcome to the troops. I posted too much music, they
wouldn't tell me why. Oh I hear that Facebook trollin', I hang my
head & cry.
I saw Ol' Todd comin', comin' with a post. Till all the algorithms
turned Todd into toast. But, Todd fought back like Briar, just to
make 'em scream. He just keeps on goin', chasin' all his dreams.
Ol' Don was makin' noises in other peoples groups. Little did he
know, that they were full of poop. So, he tried to quit them all,
but he ran out of time. Now, he's in that Facebook jail, servin'
out his time.

sdaddyo has declared the following Composition and Sound Recording copyright intentions for this collaboration, when completed:

The Void Final mix
Run Away
You Don't Look My Way Anymore
Frankincense On Your Fingertips
Existential
The Invisible One
This Time (feat. minime)
Train Train Train
Nothing Is Bigger (working title)
Home