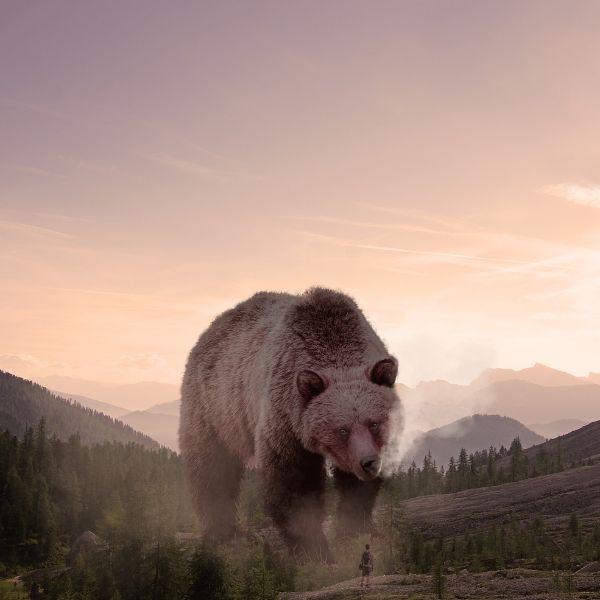 Started by SimonW, © All Rights Reserved 2021

Help me finish this collaboration. I am currently requesting uploads for the tracks listed below. Feel free to contribute.
- SimonW

This lyric was inspired by reading about the epic survival story of Hugh Glass, a fur trapper who was attacked by a grizzly bear in 1823 while on an ill-feted expedition in Missouri.

He somehow survived the initial attack, and killed the bear, and was then aided by the others in his party. Carrying what they thought was a dying man on a litter slowed down the group and put them at great danger of further attack from the Ree Native Americans. So the leader of the group promised a payment for two men to sit with Glass until he had died, and then give him a decent burial.

The stubborn glass, however, refused to do the inevitable and die. Eventually the two men, Fitzgerald and Bridges scarpered, taking Glass' gun and leaving him to die alone. Glass then embarked on an incredible mission of survival and revenge. The story formed the basis for the Revenant film but the film did a woeful job of staying true to the facts, so I wanted to convey a truer account of his story.

The lyrics that emerged are much longer than I'd intended but maybe it can be translated into an EPIC song?! :)

I Ain’t Dead Yet

I was scouting for game on that fateful day

Spooked a mama Grizzly from where she lay

Get chewed on and clawed at

Bones crunched and I bled

But I fought for my life

And I ain’t dead yet

I was bandaged and shunted two days while I wheezed

Every hour brought more risk of attack by the Ree

Got jostled and jangled

‘Christ, why can’t we just

Put a shot in his head?’

Major Henry reached a decision that had to be made

I was lain near a stream in the mercy of shade

Coin was promised and taken

For two to stand guard

And dig me a new home

When I’d folded my cards

But Fitzgerald and Bridges they left me to die

Took my knife and my rifle, stole away in the night

I was fevered and famished

And burning with hate

I battered a rattler and ate it down raw

Crawled on my belly, then crawled some more

I was half dead and dying

But refused to give in

That’s the worst kind of sin

My wounds festered with maggots, them claws had cut deep

Slashed throat ached with each morsel I scavenged to eat

Marrow from a carcass

It was only my anger

Took the edge off the hurt

The furnace of vengeance restored my eyes’ glint

Emblazed in my mind

When I’d took back what is mine

Those vermin had scarpered but to whichever nock

There was no path too far that I wouldn’t look

Got help on the way

From Mandan and Sioux

Healed the wounds on my back

And shared pots of stew

Caught up with the past on New Year’s Eve

The sentries gave fright when I walked out the trees

‘Hallo! You thought I was gone under, didn’t you? Hand over my horse and my fixins – I ain’t dead yet by a cussed sight!’

Found that young Bridges, the cat had his tongue

Shamefaced, he showed guilt for what he had done

Had rights to kill him

And I don’t know why

But I didn’t pull the trigger

Not his day to die

Trekked me some more to hunt Fitzgerald down

And at Fort Atkinson I found me that clown

‘What ya mean he’s an enlisted man? Hand over my gun and tell him I ain’t dead yet, not by a cussed sight!

But he fetched me my Hawken and some recompense

I told Fitzgerald I’d find him

Should he ever leave the army

But he looked all the world

Yeah, I ain’t dead yet

No, I ain’t dead yet

Not by a cussed sight!

SimonW has declared the following Composition and Sound Recording copyright intentions for this collaboration, when completed: