JayeshRaikar / Jayesh Raikar 3 hours ago
Why have a King at all - Drums and Guitar Solos needed We need Drums on this song. The track without Drums is as follows: https://www.kompoz.com/music/collaboration/970450/file/1183702 We also need Electric Guitar Solos at [02:18 to 02:45] and [03:41 to 04:08]. In case you want to hear the song with Vocals and Drum Loops, check out the following track, but do not refer to it for the Timestamps: https://www.kompoz.com/music/collaboration/970450/file/1159595 This song will be released as a Single on my SoundCloud page (Masala Central). Everyone who has worked on the song will be given the credit for their roles and contributions. Do let me know if you have any queries. Disclaimer: The Acoustic Guitars in this song are Music Loops downloaded off the Internet Thank You.
Read Comment Like
0   0

MikeJM / Mike JM 8 hours ago
So honestly it's a little frustrating now . . . I mentioned that I paid for my subscription on the 31st of December, and had it for a few days but since then I've been charged and had just the basic subscription instead of the PRO I've paid for. So it was suggested that I contact raf 9 days ago, and still nothing. This is not to bash on him, I know he's busy and that he has done a lot of great things for me with this site, but I was just really excited to start up some new projects now that my schedule is stable (for once) and it's a little disappointing that I'm still stuck on the beginning plan. Hopefully it gets resolved soon, and I can continue jamming with all of you amazing Kompozers! Any advice at this point???
Read Comment Like
4   1

PREMIER
RobAsh15 / Rob Ash 13 hours ago
Ostermeister is NOT just submitting ideas to project owners. He's not submitting auditions to a project owner to be considered for use as a mix for the song. He's taking other people's songs, doing shitty remixes on whatever tracks he happens to find posted in a project (like a really early scratch mix that the owner might not want anyone but the players who work on the song to hear), then POSTING HIS MIXES all over the site and asking for changes, submissions, asking people to replace tracks, etc. None of this does he ever ask permission of the project owner for. And all he's ever done on the site are these drive-bys... He has two profiles. Ostermeister and Ostermeister 2. The first has one project that has eight remixes in it. Nothing else. My guess is if you contact all 8 of those project owners half of them won't even be aware their song was co-opted this way. On his newer profile, he's already posted my tune in two groups asking for contributions and putting the song forth as if he has direct control over the project. The last time I checked, I started the project. I haven't accepted any tracks from Ostermeister yet, so he has NO ROLE in my project as of now. He NEVER DID. I'm not his only victim. He's done the same thing to AviRosenfeld. He posted this: https://www.kompoz.com/music/group/guitar/a/1183560#comment1401117 in the guitar group. The only problem is, IT'S NOT HIS SONG. It's AviRosenfeld's song. And the track on the post by Ostermeister is listed on that project as an IDEA, not an accepted track. I'd say there's a one in three chance Avi hasn't even noticed the track yet. EDIT: He knows now. I PMd him. Avi deleted the track submitted by Ostermeister so that it doesn't appear in a post by Ostermeister in the GUITAR PLAYERS GROUP, where he makes it seem as if it's his song to request help with. I took exactly the same action when Oster co-opted my work and refused to listen when I tried to politely fix the problem. Sharing is fine. But almost no one here, and no one I care to work with, wants to show an unfinished song. There are times this needs to happen, like, to ask for contributions, or to ask for help with a part, or a track, or whatever, but that is up to the project owner to handle it unless he appoints someone else to do it. If that's not the way it works, then why is there a place for a project owner to appoint managers on a project that have special privileges? I CAME BACK TO ADD: Each project has a preview track. That is the way for the members of that project to show a preview of a work in progress to the rest of the site. Any placement of the track anywhere else on the site should be discussed by the members of the project and then agreed to by the project owner. If that isn't true, why does the project owner have the right to TURN OFF sharing for the project??? If I had to guess, this Ostermeister is either a kid, or not very bright. His work is... well, he needs tons of practice, I'll say. I would also suggest that what we are talking about here is the proper way to submit work, and respect and etiquette, Not sharing rights, reposting, or any of that. I have no clue what SMG's issue is, and I'm not trying to start a fight with anyone, but this dude Ostermeister isn't going to stop being a jerk until someone with authority tells him to stop, or he gets the boot. I'm talking to several people about this in PM land now. If you think this behavior is acceptable, ask yourself this: What's the life expectancy of this site, do you think, if EVERY SINGLE PROJECT IS PRIVATE? People, I'm a bit of a jerk, sometimes, but I happen to have a fair-sized network of players on here I can contact toinvite to projects. Would that be true for most? If this is the way things really are, why would any musician EVER post a project publicly here, or here at all?
Read Comment Like
10   1

DwayneMartinVincent / Dwayne Vincent 21 hours ago
Trash talk and trolling is unacceptable. Fair warning to the younger crowd who are insecure and think its cool to trash talk. Rude is the new cool in their tiny brains. It isn't for me so watch out.
Read Comment Like
0   1

DwayneMartinVincent / Dwayne Vincent 1 day ago
Needed a Limiter for mastering. Decided to try "Unlimited" It's free and easy to use. https://bedroomproducersblog.com/2017/09/01/sonic-anomaly-releases-free-unlimited-mastering-limiter-vst-plugin/ 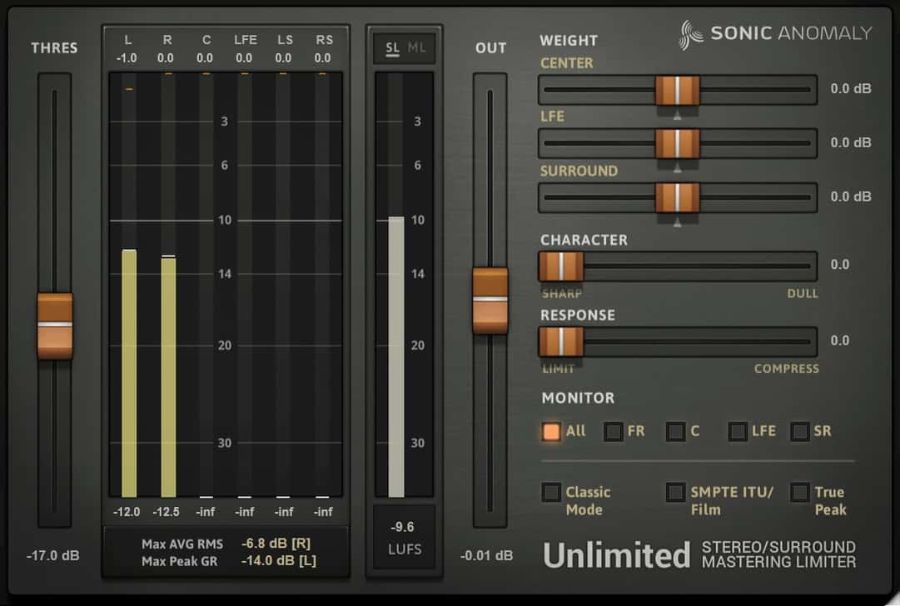 DwayneMartinVincent / Dwayne Vincent 1 day ago
There are two types of musicians. Composers and posers. Posers are these asshats who can barley play posing with their guitar like it's their pride and joy. Reality is the poser can't even play the thing. Less time taking pics with your guitar and more time practicing is my advice to the poser. Just my random thought of the day.
Read Comment Like
11   2

JayeshRaikar / Jayesh Raikar 1 day ago
Why have a King at all - Guitar Solos needed We need Electric Guitar Solos at [02:18 to 02:45] and [03:41 to 04:08]. In case you want to hear the song with Vocals, check out the following track, but do not refer to it for the Timestamps: https://www.kompoz.com/music/collaboration/970450/file/1159595 This song will be released as a Single on my SoundCloud page (Masala Central). Everyone who has worked on the song will be given the credit for their roles and contributions. Do let me know if you have any queries. Disclaimer: All the Instruments (except the Bass Guitar) on this song are Music Loops downloaded off the Internet Thank You.
Read Comment Like
2   1

OsterMeister2 / Oster Meister 1 day ago
Q: DO I NEED TO ASK PERMISSION BEFORE UPLOADING AN IDEA TO AN EXISTING COLLABORATION? A: No! Kompoz is an open collaboration community. Artists create collaborations here because they want others to contribute. New members often feel that it might be rude to upload an idea to another collaboration already in progress without first asking. Nothing could be further from the truth. Kompoz works when people jump in a submit ideas to other projects. Current members are hoping you and others will upload frequently.
Read Comment Like
14   4

PLUS
arturl / Artur Labermaier 1 day ago
We are looking for a hiphop artist for these lyrics andd the song below! Lyrics: Frederic W. Frees, Music: Artur Labermaier Is it complicated how the two of us debated over things we had created (doesn?t take an education)? So, dismissing me with no regard, you say you have a passe heart and now your feelings have been hurt, I left you standing in the dirt with all the rumors that you heard that loving me was just a fraud that I was weird, that I was odd, (to you a pointless monologue) with very little knowledge of the things that really matter, and your love that I would shatter into tiny little pieces. That?s what you were feeling, loving me was unappealing and the chances that you gave me (the advantage it would save me), and that ?s when I called you baby and it made you kind of crazy, but that day I started texting (not the thing you were expecting) and you went into a tizzy (but the words are never easy), that it wasn?t common knowledge that your love was going sour. You said I was a failure (like a little dying flower), no one else could be so hurtful at a time you?re playing hardball. Will you join our team?
Read Comment Like
0   1

PREMIER
BrendanB / B flat 1 day ago
Any drummers want to join us on this fun, twangy rock song with DavidMC on vocals, myself and Rbradley59 on guitars, and CRANKIT1 on bass? Drumless version here: https://www.kompoz.com/music/collaboration/1182855/file/1183266 Thanks!
Read Comment Like
0   2

sdaddyo / Don Stanton 1 day ago
Here is another one that I have no idea who wrote or originally performed it. I first heard it by Peter, Paul, & Mary.
Read Comment Like
0   2

sdaddyo / Don Stanton 2 days ago
I have no idea who wrote or originally performed this song.
Read Comment Like
4   3

Joshuabloem / Josh Flower 2 days ago
Im upgrading my music studio at home. I have good microphone, focus rite , midi piano. Im looking for gear which helps me with better quality and DAW software. Any tips?
Read Comment Like
2   1

Joshuabloem / Josh Flower 2 days ago
Hi there :) Any songwriters want to Write for me to sing? About strength, power, healing, acceptance Thank you
Read Comment Like
0   0

PLUS
riboslav / Sinisa Petric 3 days ago
A raw mix of guitar, slide guitar and my lousy vox. Drums, bass, and wild male vox needed. I would also appreciate lyrics corrections and suggestions.
Read Comment Like
1   2