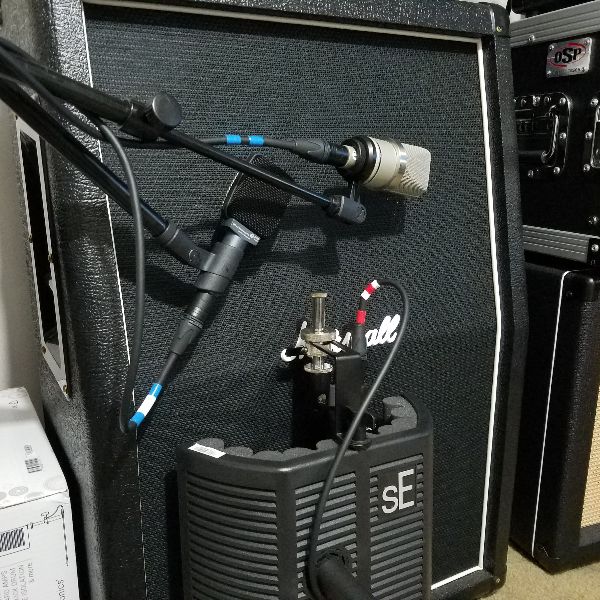 
Great vid mac! This is the kind of content that will make this group really cool. Nice setup, BTW.


Nice contribution! It's really cool when a "light bulb" flashes in our heads. Like when I realized there are only 2 pure diminished chords: C and C#. All the others are inversions of these two!!!! :-) Also, about pentatonics, there are "magical" things, like: "how come major and minor pentatonics fit so well on many blues songs!?!?" You can use the third as major or minor and it may fit! As for the freatboard, I use to think about the relative tonality of the key when it's major (C major, then use A minor). And then use the associated minor penta scale (maybe with the 2nd, 4th and 6th degrees to add some collor). Not to mention that I tend to use Em or G as the key... much more "range" for the guitar (due to its standard tunning, may change to whatever the tunning is of course).


Thx you both! I´m actually collecting examples for the second part of the video to showcase those "magical" things :) I would like to use the Blues Chord Progression I IV V (A7 D7 E7) and a POP progression like I V vi IV (A E f# D) as the base and than kind of calculate the options. Which of both sounds how and why. Over the particular chords and within the progression. By now I´ll highlight that minor pentatonic is nice over all chords of the blues progression but could also by exchanged by the major, or used mixed (A7 - minor, D7 und E7 major for example). Regarding the POP progression I´m pretty sure that the major pentatonic would do the tick for all the chords. Any other advices?


Yes the key based approach is quite brute force but the chord based sounds interestin. So you mean using the chord tones as roots and build scales and appregios based on them? The modes you mentioned are probably going beyond major - minor pentatonic relation so they might be a subject for a later video.


something like that...or building from them based on the modes.


TBH guys, I know this kind of music theory stuff helps but, I got into it when I was younger. I was in an original band at that time. Probably very early 90's before grunge hit. It started to make me get anal with my band mates. I remember telling some of the guys, "hey that isn't in key". I started to feel narrow minded about writing. Then grunge music hit the scene. I then took all that music theory stuff, crumpled it up in a ball, put it in my back pocket and sat on it :) The best thing I ever did with it:) My take on music theory: learn it to the best that you can and then forget about it and just play :) BTW, I am not knocking anyone who wants to share theory or learn it, it IS very useful knowledge to have. Just don't let it stand in your way of writing good music ;)


First you have to learn a sufficient amount of theory before you chuck it ;)


You're right! Music is not about rules! Theory alone won't make you compose the best song ever.... The main reason I like studying theory is when I get tired of that same old pentatonic licks.... you know... Then I turn into modes and stuff like that, specially the patterns related to them. Listen to Satriani's "On Peregrine Wings", "Hill Groove" (myxolydian), "Flying in a Blue Dream" (pure lydian - f*cking beautiful music BTW, it makes you really feel you are dreaming due to the mode's ambiance).... just to name a feel. Well... it may be a matter of style perhaps.


You are completely right, i was at this point too, for me it was the moment my teacher introduced me to the way how to develop chords in jazz based on the chord inversions and also improvise over inversions instead of the plain vanilla base chord. Than it felt like the magic was out and i really wanted to stop thinking about music as a mathematical relation to enjoy playing as such again. So i did stop thinking about the theory. But now after at least 10 Years i try to fill quite obvious gaps and once they sit again stop thinking about it. Obviously as you both have mentioned you got first to know everything without gaps, practice it and than put it apart. But knowing that major pentatonic fits better over lets say popular music with several chord progressions is a thing that should not be removed from the brain completely ;)


If you think about it - it is the gaps that make us unique. Did BBKing know anything about Lydian or Myxolydian modes? Did it stop him any? If you look at the guy, for the most part of his career he's in the 10-14 fret range on the guitar. This reminds me of watching Dream Theater playing Metallica: https://www.reverbnation.com/egregoreband/song/26060380-father-of-deceit-doom Note perfect "master" dissertation but it just isn't there. Yikes...I don't even know what to say...I guess "be individual"!


I would say that the music theory stuff is great to learn, maybe even crucial depending upon what you are doing, but certainly not essential to creating music. After 4 years of it I spent the next few years "deprogramming" myself before I could just feel and write without analyzing it all. On the flip side, it does help as you develop your "ears" - when you can listen to something and recognize the thing by a name you can more quickly pick it up. And yeah - you can develop that as well w/o the training but I think the training allows you to pick up new things more quickly. I like transcribing stuff I hear / see on youtube that shows a new technique etc. I think the exercise of writing it down helps drill it in. But still, some of the very best players I know can barely read a chart.


No offense guys, have you seen the newest video of guitarstruggles? This guy is obviously reading our thread or something because he just made one of his famous shitty videos about modes: SECRET TO LEARNING THE MODES...GUITAR LESSON LIES EXPOSED!!! https://youtu.be/V788qfZ69uk Be aware, its EXPLICIT!


When I was a youngster and learning theory I made this sliding chart thingy. Actually made it out of old cigarette cartons. I cut out square holes which made windows and made another part that would slide behind those windows. The windows were spaced apart in a major scale spacing. I could use this and show you all the notes of any major or minor scale and every mode. I used it to teach others. It was quite simple really....it's just a pattern. I never did get around to making one that worked for harmonic minor. I wanted to but, didn't know the names of the modes for a harmonic minor scale/pattern :)


As far as I get it by now - the modes are nothing else than just remaining scales on for example white keys on the piano keyboard. We know major and minor quite well which are build upon C and A and uses the white keys, but you can also build a scale up from d, e, f, g and b on the white keys. Of cause the resulting scales can also be played from any key as major and minor. If that's it, it would be fairly simple... ....I just double checked Wikipedia and it seams to be true.