After downloading the Seps from an existing collaboration, you'll want to import them into your favorite DAW. You can use any DAW you wish. Popular choices include REAPER, Pro Tools, Logic Pro X, Garageband, Studio One, Audacity, and others.

Each Sep should be imported as a separate track into your DAW. The goal is to now add your own new track, by recording your instrument or vocal audition, playing along with the imported audio. Then, when you're finished recording, you'll export just your new track and upload it to Kompoz.

Most collaborations will include a sync tone on each track. You probably noticed a beep, click, or other short audio pattern at the beginning of each of the tracks you downloaded. That's the sync tone. The sync tone acts as a sort of audible marker that can be used to align the tracks. It's a guide added by the collaboration owner or other participants to help you when you're importing the tracks into your DAW. There is no magic here, and the DAW does not know anything about sync tones. It's your job to align the tracks, and the sync tones are simply a Kompoz convention that makes your job easier. All you need to do is look at the tracks in your DAW and drag them left or right so that the sync tones align.

Below is a screen grab, showing Kompoz tracks imported into Apple Logic. These tracks all include a sync tone, circled in red. Notice that the last two tracks had to be moved slightly so that the sync tones align with the first three tracks. As long as the sync tones are aligned, the rest of the audio should also be aligned. 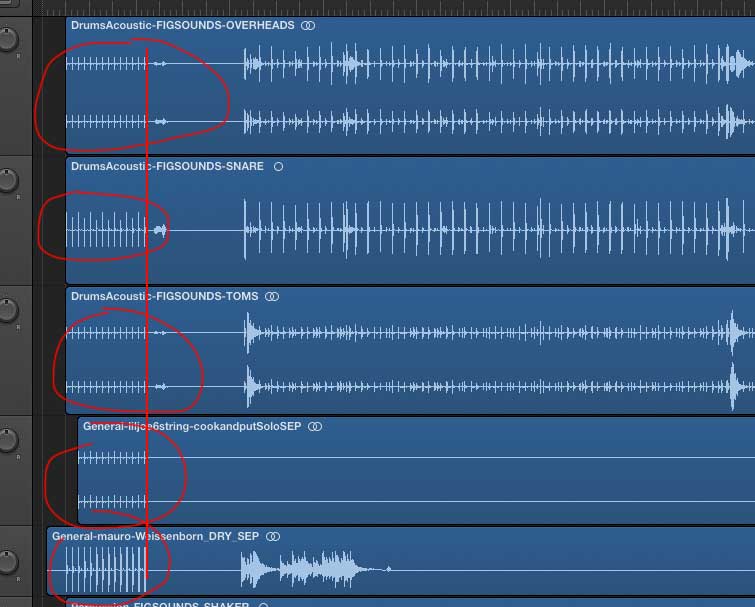 If you want to know more about sync tones and why they are needed, you can skip to the bottom of this tutorial to read more. Sync Tones will also be discussed in the tutorial on creating your own collaboration.

Now that the tracks are aligned in your DAW, you can add a new track and arm it for recording. Each DAW has a different way of doing this, so we won't cover that here. What is important is that you record a separate track, with no or minimal audio bleed from the other tracks. In other words, record your contribution on it's own track, so that you can export it and upload it to Kompoz.

The easiest way to include a sync tone from another tracks is to use mute all but the sync tone portion of that other track. You can use the automation functions of your DAW to accomplish this. In the screen grab shown below, you can see the first two tracks are completely muted (notice they are gray), and the third track has a volume automation curve added, such that the volume drops off completely after the sync tone. The fourth track is the new track I just recorded. Now, when I export these, the sync tone from the third track will be exported along with my track -- everything else will be muted out. 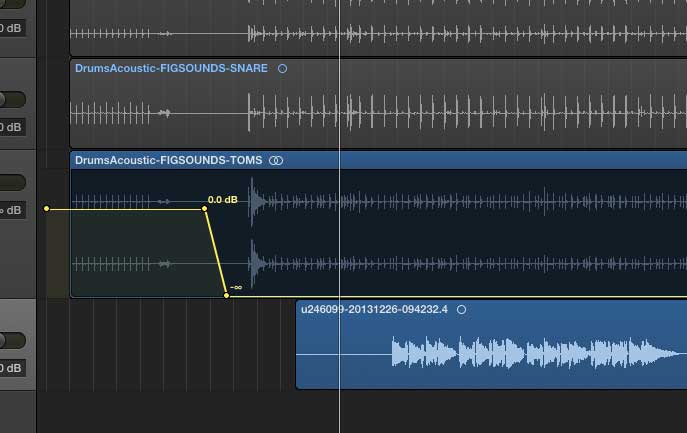 When your drummer lives in Kalamazoo and your guitar player is in Liverpool, chances are pretty good that they'll be using different recording software, and probably different audio encoders and compression algorithms. This presents a problem that sometimes results in the individual tracks of a song getting out of sync -- out of alignment -- with each other. This can happen because audio encoders will pad or even eliminate silence at the beginning of a track for the sake of compression optimization.

Let's say you've recorded a killer drum line. You save it as an MP3 and upload it to Kompoz. When you listen to the file, there's maybe a second of silence, then your drums kick in -- sounds great. Your guitar player imports that track into his Pro Tools, arms a new track for recording, and starts laying down a great rhythm in-step with your drumming. It all sounds perfect on his workstation and he exports just his guitar track to an MP3, then uploads that to Kompoz. But what he doesn't realize is that his MP3 encoder added an extra few milliseconds of silence at the beginning of his MP3 in order to get a good byte-alignment and better overall file compression. The problem now is that when you import his new guitar track into your workstation, the two tracks will not start at exactly the same time, and you'll get noticeable track drift as the song progresses.

Another notable example: You record a guitar solo, which does not start until two minutes and 33 seconds into the song. To make things easier for your other collaborators, your recorded solo should include the sync tone at the beginning, followed by silence until the solo starts. That way, the collaborators simply need to align the sync tone with the other tracks, and your solo should then start exactly at the time intended, relative to the other tracks.